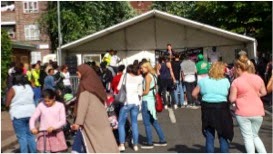 On Sunday over a thousand White City residents enjoyed a sunny afternoon at the terrific W12 Festival.

Organised by the Big Local with the help of dozens of volunteers, the event saw local performers entertaining crowds from two stages in the centre of the White City Estate.

There were also sports competitions, food from local restaurants, a dog show, bouncy castle and fairground rides. White City resident Sinead said “After a brief rain scare, the Festival was better than ever this year. It’s an authentic White City event—most of the performers are from the area, and its brilliant for them to get to perform on a big stage in front of their friends and neighbours.”

The day provided a good opportunity for local groups to sign up new members and raise awareness of their work. The Friends of Wormholt Park had a stall that set out proposed changes to one of White City’s most important green spaces. Resident input into the design has increased in recent months as a result of the early work of Hammersmith and Fulham Council’s new Policy and Accountability Committee responsible for parks.

The Save our Hospitals campaign was also active gathering signatures for petitions calling on the Government and NHS bosses to drop plans that would see most of Charing Cross Hospital sold to developers, with the loss of hundreds of acute beds, and the effective closure of both A&Es in Hammersmith and Fulham.